How to tell if pearls are real?

How to tell if pearls are real?

Pearls are timeless, elegant and precious and have always been associated with wealth. They were desired and highly valued already in Ancient Egypt, Greece, Rome, as well as India and Persia, where they were used to decorating crowns, rings, brooches, and later also church garments and ceremonial women’s robes. However, only a few could afford such luxuries. Due to their rarity and the difficulty of collecting them, they were considered more valuable than gold. The value of pearls depends on many aspects, such as: size, shape, color, luster, surface smoothness, transparency, and if you buy more – their price is also influenced by the fit and similarity of each piece. Pearls can be used for jewelry making such as earrings, pendants, rings, brooches, as well as more creative jewelry, accessories and clothing. The most valued are round pearls with unique luster, which dominate the market and can often be found in the form of jewelry made of only pearls like real pearl necklace, or combined with gold 585 and silver 925. Pearl jewelry fascinates both young and mature women, so it is worth finding out more about the types of pearls, their origins, which pearls are real, and how to distinguish them from each other, as many jewelers use fraudulent tricks. The most popular international pearl quality rating scale used by jewelers, is the classification using the following symbols: A, A +, AA, AA + and AAA, where pearls marked with AAA are of the highest quality. The rating is influenced by the size, shape, color, surface, luster and thickness of the mother-of-pearl.

We can divide pearls according to their origin, color and shape:

Due to their origin we can distinguish:

Where pearls come from? 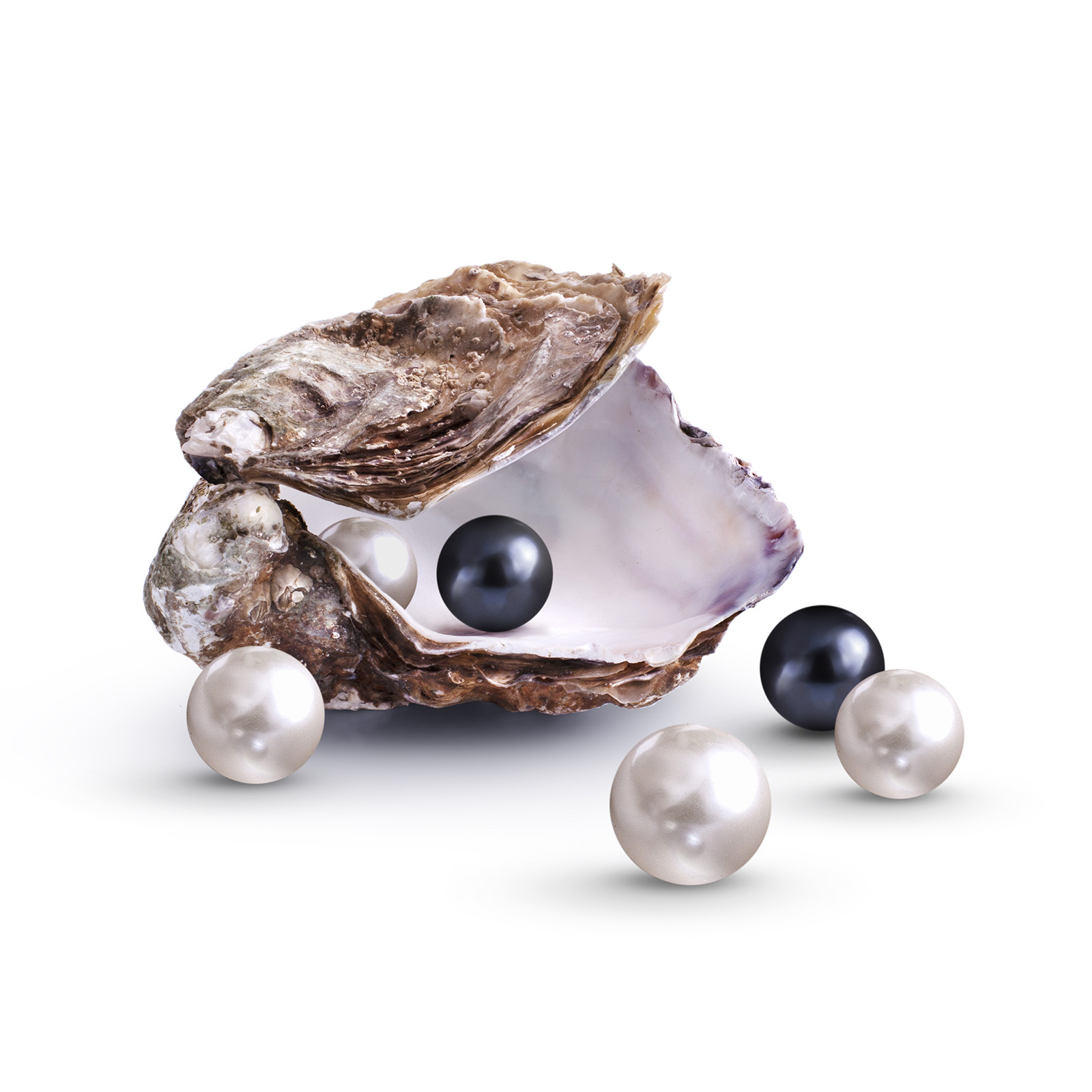 Natural pearls, also called wild pearls or real pearls, are organic gemstones, that are naturally produced inside the shells of mollusks, known as pearl oysters, that inhabit the seas and oceans. The pearl is made of mother-of-pearl, the same that lines the inside of the shell of a mollusk, and is composed of calcium carbonate and protein substance. The formation of pearls has a place, when a small bit of seaweed or tiny crab get stuck in a mollusk, so the oyster protects itself by wrapping the intruder with nacre. Their uniqueness results from the fact that the creation of a real pearl is extremely rare. Out of many thousands of mussels, only one produces pearl, which is why it is valued more than gold and, unlike other gemstones, it is not mechanically processed. What is more, its natural state has a beautiful shine. Moreover, a pearl can be compared to a fingerprint, because there are practically no two identical copies. The size of the pearls is very diverse, and ranges from 1 mm to about 15 mm in diameter. The color of pearls depends on the species of mussels and the type, quality and temperature of the water, in which they live.

Real pearls wear out and age, what is visible in getting mat, cracking, peeling, chipping off, and finally scattering into a fine powder. The life of a natural pearl is estimated at about 100-150 years, but there are few specimens up to several hundred years. Attempts have been made to restore pearls, mainly to retrieve their color and brilliance, but no methods have achieved satisfactory results.
The great desire and rarity of real pearls led to the emergence of pearl cultivation, which led to the development of mass production of pearls, which are referred to as cultured pearls or farmed pearls. At the beginning, a skilled technician inserts a piece of nacre or tissue of sacrificed mollusk, into the pearl mollusk’s shell. Then the mollusk is returned to the water and starts to protect itself by producing layers of nacre, and wrapping them around implanted piece inside its shell. Pearls require human intervention and care while being formed, and about two years later, pearls are harvested. In order to speed up this process, a bead the size of a grain of sand is placed in the shell, around which a mother-of-pearl is formed. The smaller the bead, the more space is left for the construction of the mother-of-pearl, which adds value to the pearl. Farming pearls is very laborious, tedious and requires a lot of knowledge and experience. An average farm of about 50,000 pearls, after about two years, obtains about 40% of pearls suitable for jewelry production, where just 10% qualify for high quality. 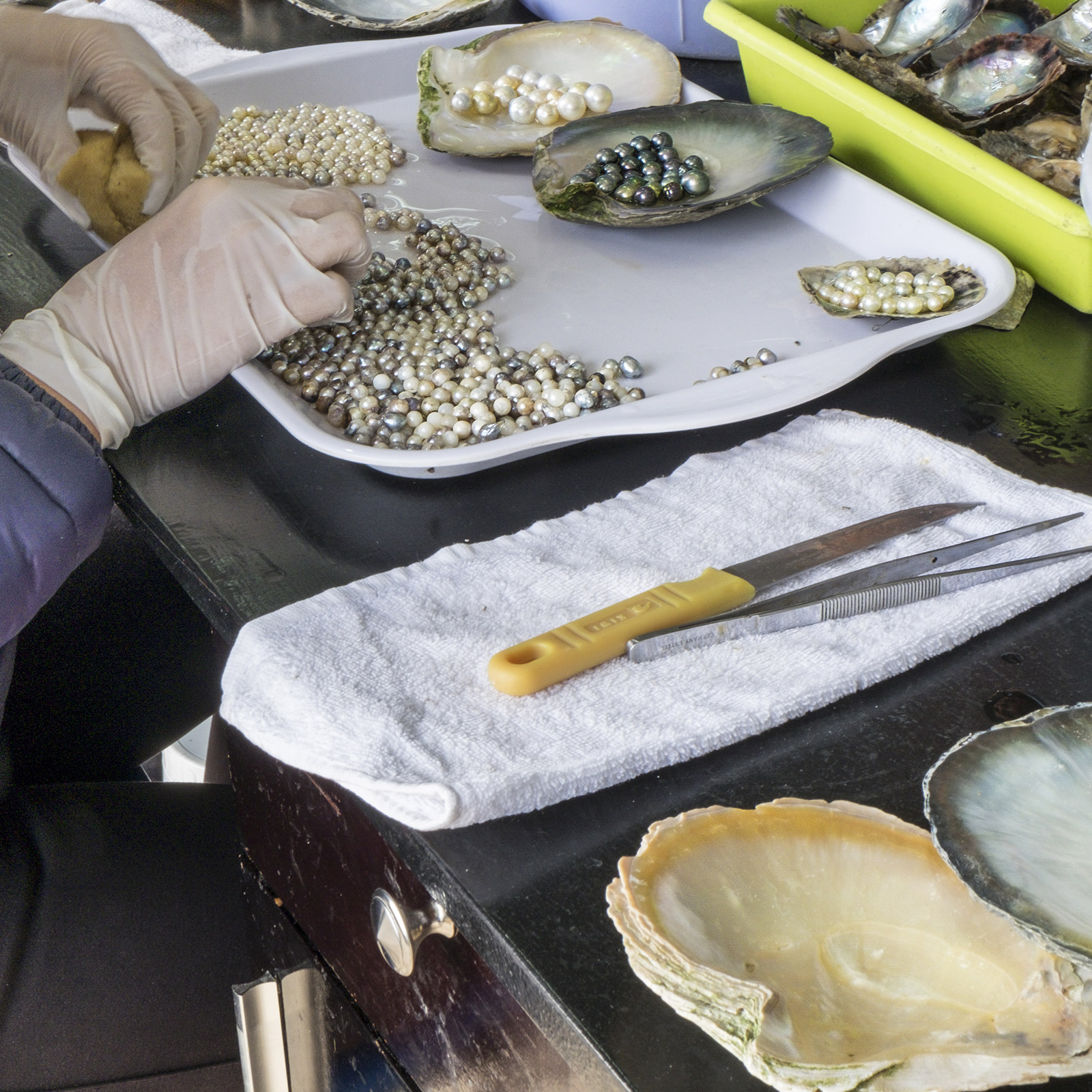 Cultured freshwater pearls are much cheaper and less demanding to farm, which has made them more popular. An additional advantage is the possibility of obtaining several pearls from one clam. The disadvantage, however, is their quality, which is much lower than that of sea oyster pearl, which makes them less attractive.
The appearance of a pearl is influenced not only by the type of water in which the mollusks are grown, but also by its temperature. In cold sea waters, pearls grow slower but have a greater luster, while pearls from warm lakes and rivers grow faster but have a duller surface.

Cultured pearls resemble natural pearls, which makes them very difficult to differentiate by comparing only their appearances. However, few methods have been developed that make it possible to distinguish one from the other. The first method is to find differences in the inner structure of pearl using X-rays. By applying this method, we obtain results, that help us classify the pearl:

Ear back earrings with ball – swing

Despite the greater availability of cultured pearls, they can still cost a lot, and their value depends on the quality, which is influenced by: size, shape, color, surface, luster and thickness of the mother of pearl. Due to growing demand of pearls, and much easier and faster raising the mollusks in pearl farms with conditions similar to nature, at the beginning of the 20th century, the natural pearls harvesting has become unfavorable, so natural pearls became even more rare. Although you can find single specimens on the market today, they are usually found occasionally by fishermen, while collecting oysters and snails. They are very costly and mostly being sold to auction houses, collectors, or traded as antiques and trophies. The rarity of natural pearls, continuous improvements of raising cultured pearls, as well as the growing demand for pearls, made the International Congress of Jewelers in 1926 stated that there is almost no difference between cultured and natural pearls, so both can be called real pearls.

Today, almost all pearls sold in the world come from farms, which require a lot of time and experience, therefore the market is flooded with more and more equivalents imitating real pearls. Unfortunately, jewelers often take advantage of customers’ lack of knowledge and define their jewelry as decorated with real pearls, so it is worth getting familiar with the most popular imitations of pearls, and learning to distinguish them from the real ones.

In addition to real and cultured pearls, the market also includes pearl imitations, also called artificial pearls, which look like real pearls, but are usually made of glass, plastic or shells, and are enameled to resemble the surface of natural pearls. There are many types of pearl imitation:

There are also one-of-a-kind pearls made of crystal glass on the market, produced by the world-famous Austrian company called Swarovski, founded in 1885. To find out more about Swarovski Pearls, read Swarovski Pearls, and discover 125 years of Swarovski history. Swarovski Pearls, due to their high quality and similarity to natural pearls, are most often combined with silver or gold. By choosing jewelry findings in the form of silver chains and pendants, you can make a beautiful floating pearl necklace. To create elegant earrings with a pearl, it is enough to order silver leverbacks for gluing a pearl. A bail for pearl will allow to create a subtle pendant, which joined with silver chain will be the perfect complement to earrings. A pearl bracelet has become a hit of recent seasons, which can be easily created by threading pearls on an elastic string and adding decorative spacers or charms between them. When deciding on a pearl ring, all you need to do, is choose a ready ring setting and paste in the pearl.

Below are some examples of jewelry with Swarovski Pearls: 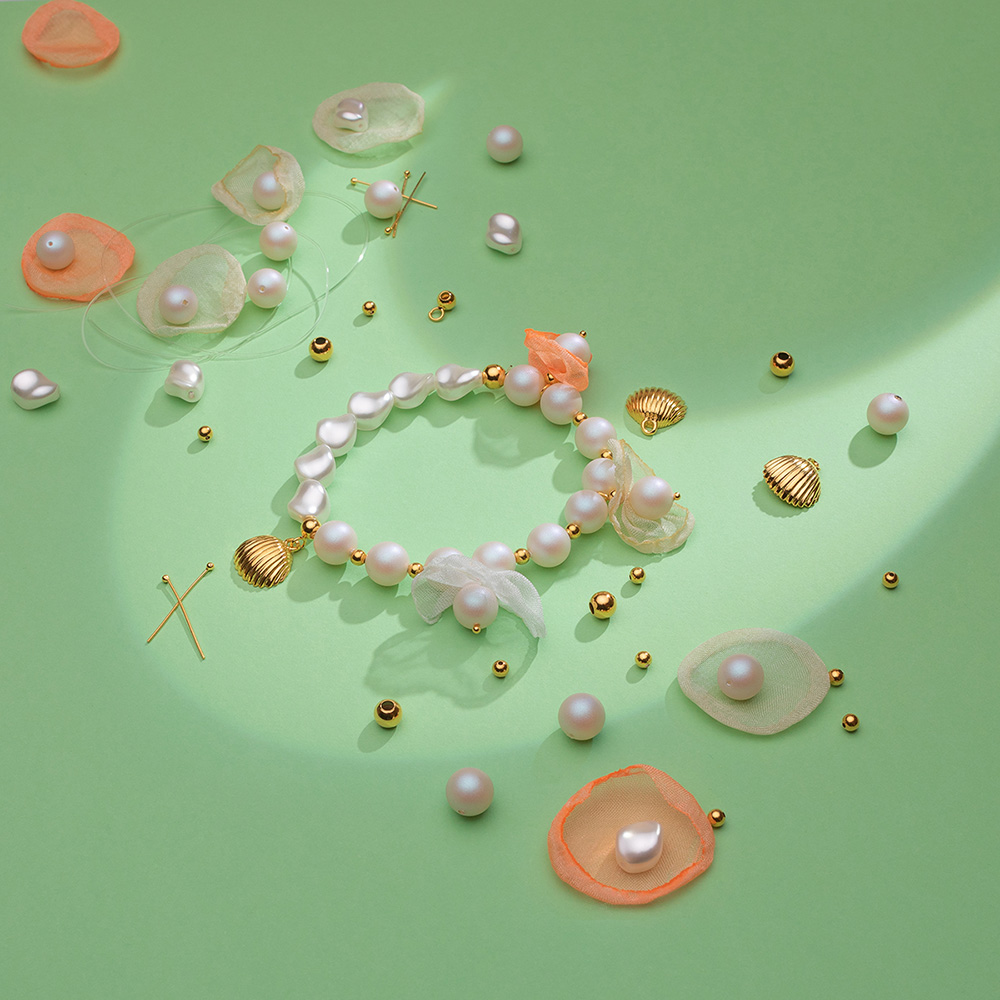 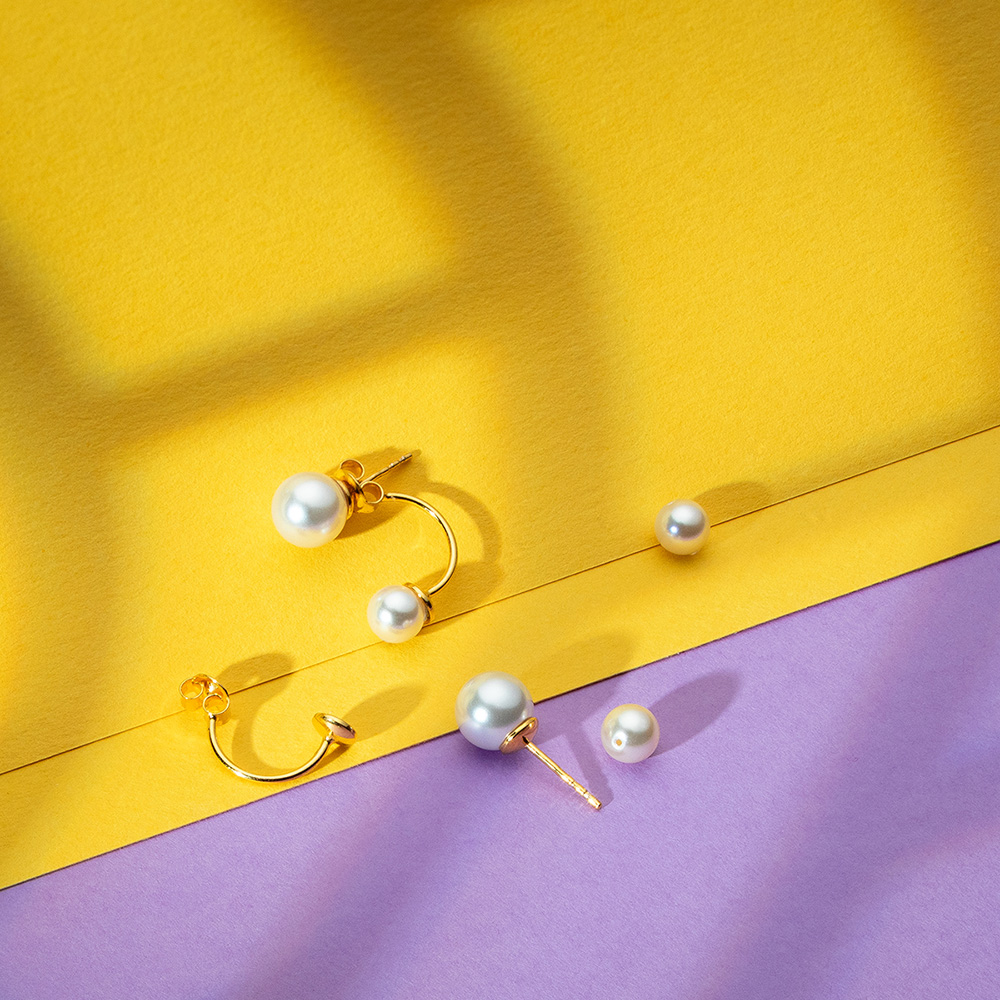 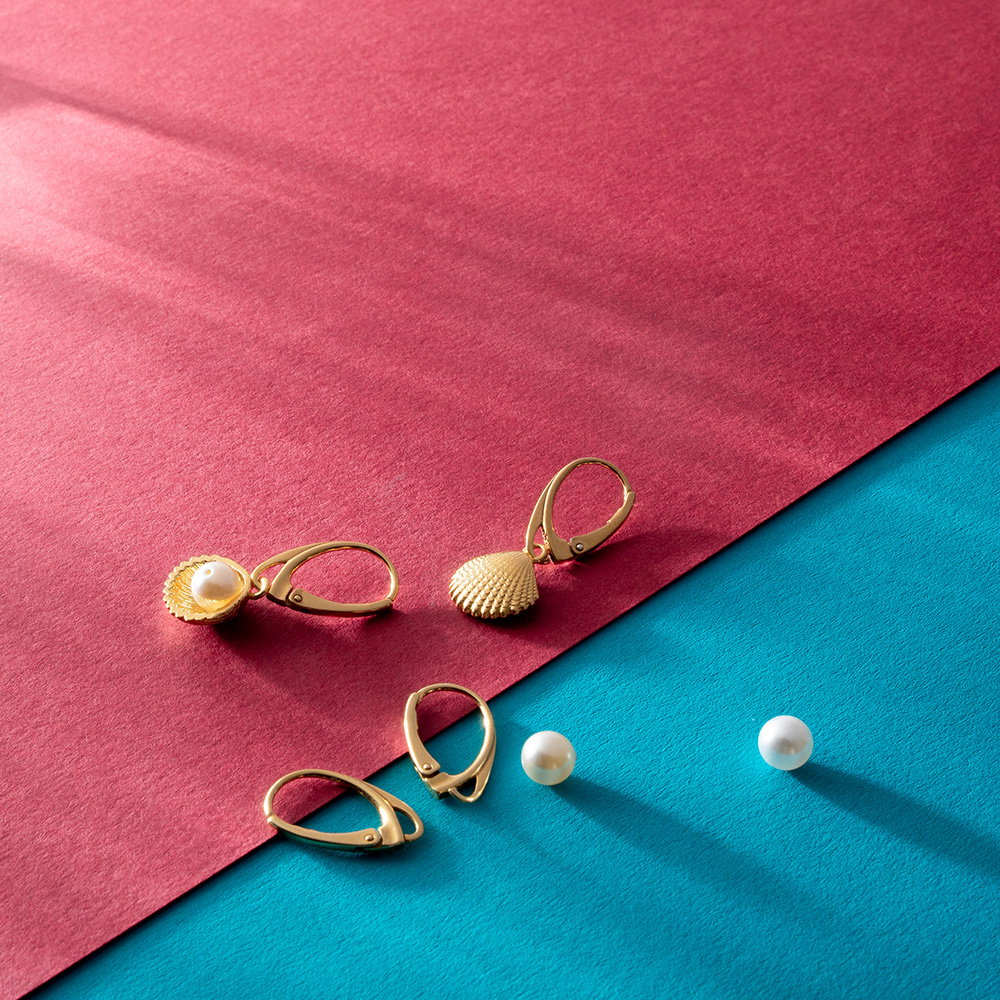 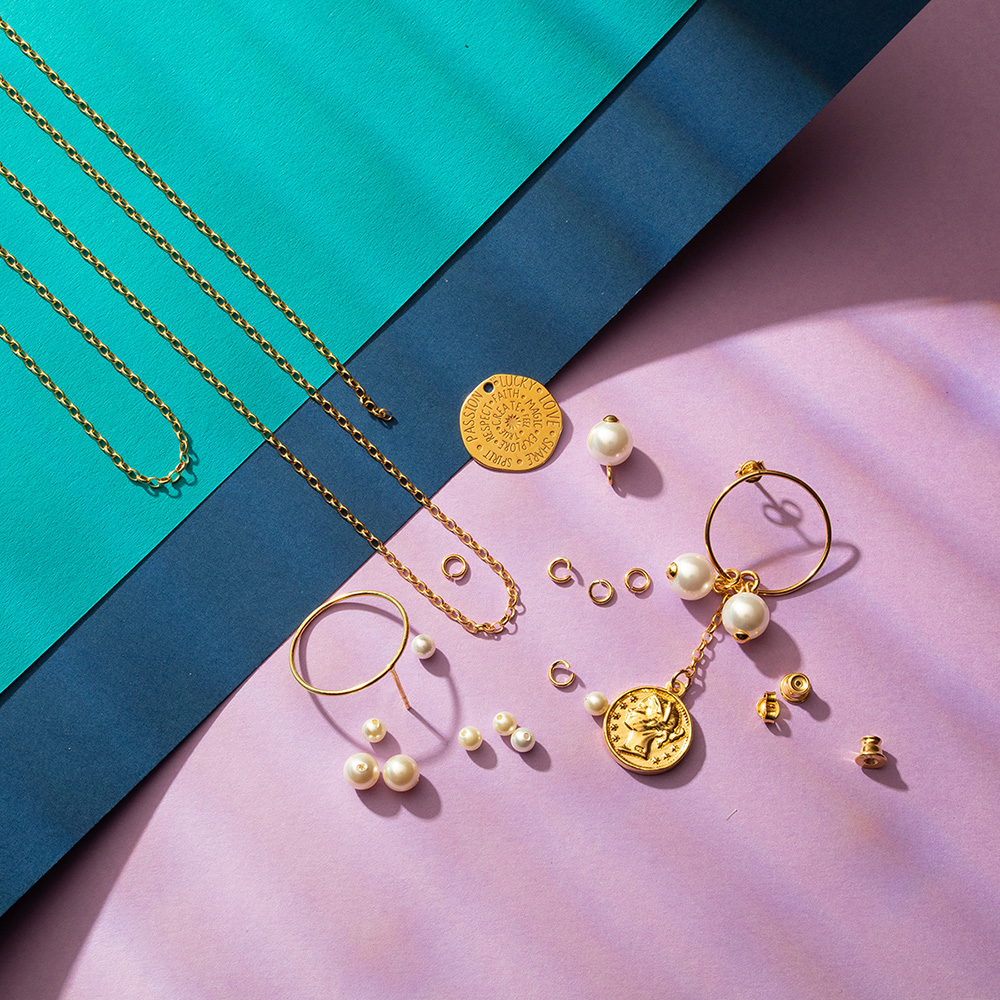 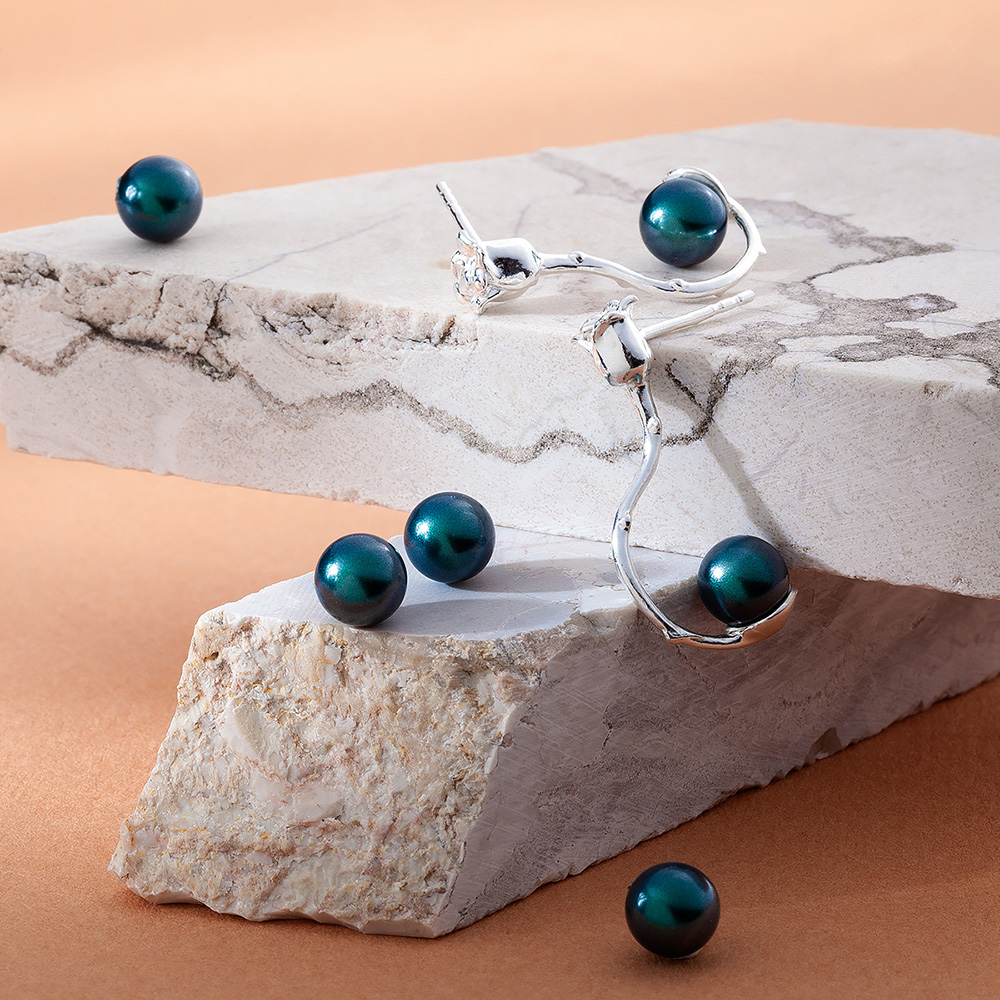 The dynamically growing popularity of pearls leads to the emergence of newer and more advanced solutions that really closely resemble real pearls, so it is worth getting to know few features that differentiate real pearls from imitations:
Apart from the six main differences, that affect not only the classification of pearls, but also their value, it is also worth bearing in mind that:

When buying pearl chain, a very important feature is their similarity in shape, size, color and surface. Real pearls will always be more or less different from each other, while the imitations should be identical. When deciding on pearls threads, it is also worth paying attention to whether there are knots between the pearls. In the case of real pearls, it is a common practice to prevent pearls from rubbing against each other, and also from spilling if broken. Strands with fake pearls won’t have such knots, because they require too much work.
Another example is the purchase of ready jewelry with real pearls. The high price of pearls means that they are usually combined with silver or gold, so if it has been finished with some other cheap metal, it suggests that the pearls are not real.

Pearls have always intrigued and attracted attention due to their natural beauty, rarity and magical powers, that have been attributed to them, since ancient times. Although all pearls in the world circulation are raised on farms, they are still considered a symbol of luxury, wealth and timeless beauty. Pearls in jewelry add elegance, increase its value and prestige. Unfortunately, many jewelers and sellers do not clearly specify, whether the pearl is an imitation, which is required by international standards, so it is worth having at least some basic knowledge, and learn to distinguish them, or be vigilant, and consult trusted jewelers and buy from reputable sellers. Silvexcraft, as a manufacturer of jewelry findings and authorized dealer of Swarovski Pearls and Crystals, offers the highest quality in wholesale prices, so we encourage you to familiarize with the wide range of products, and contact us if you have any questions or concerns.

Do you want to find out more?
Explore wide offer of jewelry supplies and jewelry services of Silvexcraft
Get inspired by jewelry with pearls
If you found this article valuable, we would be grateful if you like, share with others, or comment, which will be an energy booster for us to write more articles 🙂 Thanks and Have a Nice Day!
💗 And follow us:
Instagram: 👉  @jewelry.findings
Facebook: 👉  Silvexcraft World
Youtube:    👉  DIY WITH SILVEXCRAFT
Pinterest:   👉  Silvexcraft

Join our group of jewelry makers:👉  Making jewellery with Silvexcraft